Over a century ago, Turtle Soup was earmarked in many a home cook’s favorite cookbook. It is said this was U.S. President Howard Taft’s favorite food. So seriously did he take this dish that he even selected a special chef for the White House who was a master at cooking a good Turtle Soup.

Their creole version is thick and stew-like. It is usually topped off at your table with a drop of sherry. No, it does not taste like chicken, but more like a veal stew.

At the helm of Commander’s Palace is Executive Chef Tory McPhail, a young and highly talented Culinarian. Chef McPhail is credited with restoring Commander’s to the culinary magnitude bestowed upon the restaurant when renowned Chefs Paul Prudhomme and Emeril Lagasse were running the kitchen. We had the pleasure of meeting Chef Tory and enjoying his cuisine last year. One of my favorites was the Turtle Soup. Commander’s Wine Guy Dan Davis even offered up a wine pairing for the soup!

I asked Chef Tory if he would be kind enough to share his recipe.
(See adjacent page).

The recipe serves 12 people. Left over soup freezes very well.
Word of caution — use only snapping turtles or farm-raised turtles.
Sea Turtles may not be used, as they are poisonous to humans, and illegal to catch!

After researching the cost of turtle meat, Commander’s Palace’s Turtle Soup is a real bargain at $8.50 a bowl!

PREPARATION:
Melt 4 tablespoons of the butter in a large soup pot over medium to high heat.  Brown the meat in the hot butter, season with salt and pepper, and cook for about 18 to 20 minutes, or until liquid is almost evaporated. Add the onions, celery, garlic and peppers, stirring constantly, then add the thyme, oregano, and bay leaves, and sauté for 20 to 25 minutes, until the vegetables have caramelized. Add the stock, bring to a boil, lower the heat, and simmer uncovered for 30 minutes, periodically skimming away any fat that comes to the top.

While the stock is simmering, make a roux in a separate pot: Melt the remaining 8 tablespoons of butter over medium heat in a small saucepan and add the flour a little at a time, stirring constantly with a wooden spoon. Be careful not to burn the roux. After all the flour has been added, cook for about 3 minutes until the roux smells nutty, is pale in color, and has the consistency of wet sand. Set aside until the soup is ready.

Using a whisk, vigorously stir the roux into the soup a little at a time to prevent lumping. Simmer for about 25 minutes. Stir to prevent sticking on the bottom.

Add the sherry, bring to a boil, add the hot sauce and the Worcestershire, and simmer, skimming any fat or foam that comes to the top. Add the lemon juice and tomatoes, and return to a simmer. Add the spinach and the chopped egg, bring to a simmer, and adjust salt and pepper as needed. This soup freezes well.

Note: We use alligator snapping turtles, a farm-raised, fresh-water species available all year. It's illegal to use sea-raised turtle, so farm-raised is fine. Turtle meat usually comes in 2 1/2-pound portions, so this recipe is written to use that quantity.  It freezes well and can be ordered by mail. 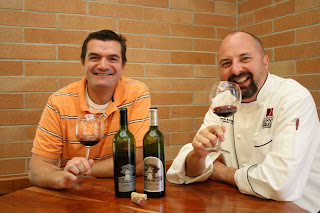 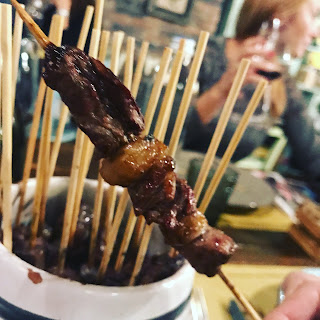 Story and photo by Christopher J. Davies  If you have not yet visited the Abruzzo region of central Italy, it is worth a stop. Just about 2 1/2 hours east of Rome is the culmination of Italy’s Apennine Mountains and the Adriatic Sea. There are amazing national parks and preserves plus ski resorts. Pescara is the largest city, located on the Adriatic Sea. They have an International Airport and many stores and amenities. The region is known for its Montepulciano d'Abruzzo, medium bodied, plummy red wine (no relation to Montepulciano in Tuscany). It is also famous for Arrosticini, skewers of tender cubed lamb, that are barbequed to perfection. You can find Arrosticini as appetizers on many restaurant menus and premade for sale at butchers and grocery stores. While it is mainly made with lamb or mutton, some restaurants and butchers offer beef and pork versions. A good portion of the men in Abruzzo own a fornacella, which is an elongated, charcoal-fired, or gas
Read more